The new set of SERP changes rolled out by Google is bound to impact your digital marketing strategies. Now, marketers should ideally brace themselves for the recent SERP changes that entail multifarious attributes including PPC, Google Images, Shopping on Google, News, Knowledge Graph and Apps.

While some of the changes are part of the recent A/B tests, others are applicable only to specific geographic regions. There’s a lot to find out about. Here is a rundown ofGoogle’s SERP changes.

What are the SERP changes that marketers should know this season?

While going through this particular primer (of the SERP changes introduced by Google in 2016) one can quickly notice Google has conducted experimentation including the color of PPC ads and the length of Meta descriptions and titles. Read on to explore details.

1. Increased image results above the fold

The first – most evident SERP change that one can notice is the appearance of tabs in the Image section instead of thumbnails at the top.

For instance, if you start searching images of “Vero Moda” on Google.com, you will immediately be welcomed by “clearer” tabs like “Dress”, “logo”, “Tops”, “Jackets” and so on.

Goole.co.uk, however, has still stuck to thumbnails above the fold in the result images.

In its relentless bid to offer better search experience to its users, Google has gone on to resort to less aesthetically appealing but more space efficient tabs.

Users are left with a greater number of filtering options that can be viewed right from the top. Since the tabs don’t require as much space as the thumbnails do, Google can accommodate more images right above the fold. And the google tabs can be viewed both in the mobile and desktop devices.

Notably, Google is yet to introduce this change on a larger scale (i.e. across different geographical regions). So, when you are searching images on Google.co.uk using your mobile devices, you will still not be able to see those tabs.

In fact, Google.uk doesn’t even show thumbnails on the mobiles. All you can find there is a shred of text links instead. This particular experimentation is more on the lines of the Google Pigeon Update, which was tested only in certain countries before its international appearance.

2. PPC ads: It is not as easy to spot them as before

Leading the pack of the SERP changes that we are talking about are the PPC ads. Yes, our discussion on Google’s SERP change 2016 wouldn’t be complete if we exclude this one.

Marketers across the globe are yet to wake up to Google’s experimentation with the green and yellow ads labels. Make sure that you are acquainting yourself with relevant details without further delay.

Have you noticed how Google has already started showing the green ad labels beside the PPC ads instead of the yellow ones in the UK SERPs?

Among all the latest SERP changes rolled out (or about to be rolled out) by Google – this one has managed to generate a lot of buzz – perhaps more than any other change mentioned here.

As experts are now gauging – it’s still in the experimentation stage. Every time Big G has been showing these green labels beside these ads it has been ploying with the idea of generating more clicks (and revenue as a result).

Quite notably, it is the same green hue which Google uses for the URL part of both paid and organic search results. It’s the camouflage factor which is tipped to rake in more moolah for Google.

However, the change will become more consistently visible if the move actually turns out to be profitable. As per latest reports, Google is yet to take a final call on the same though it has been testing the same since April.

3. The Introduction of the Product Info Graph

and its usage is primary associable with Google Shopping. The graph is known to derive all its information from Google Shopping and not from Wikipedia.

The SERPs will now directly show your product specifications on the right side of the page when you are accessing your desktop.

Formerly, this space (i.e. which is now occupied by the Product Info Graph) was occupied by PPC ads. 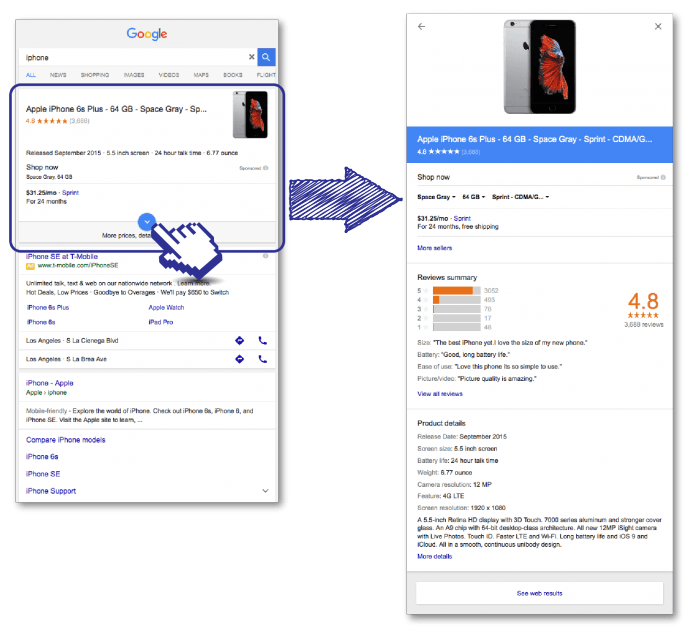 “Product specification” entails reviews, product details, and other information. If Product Info Graph is implemented on a larger scale, then users will not be required visiting the actual product page separately.

Businesses that have invested in PPC campaigns must especially take note of this particular change. If you are not yet on Google Shopping, then you won’t be able to add the Product Info Graph as an extension to your paid advertising campaign.

Once again, it can be said that Google is still experimenting with this particular change- simply because it is limited to search terms. You may find the Product Info Graph for certain terms while it is not yet available for most of the terms yet.

At this stage, experts are not even sure for which search terms the graph will appear and for which terms it will not- and nothing as of now can be zeroed in on unless searches are carried out on a wider scale (i.e. with more and more keywords).

Talking about the Knowledge Graph, Google has already introduced the “People also search for” box for mobile SERPs – at least for a few search terms. The images are not yet loading properly;

Google is presumably working on a few glitches. When it comes to desktop SERPs, the “People also search for” box appears as a part of Knowledge Graph.

However, it is totally divorced from the Knowledge Graph and appears right at the bottom on mobiles. Now, there is an increased need for marketers to ensure that their sites are categorized by Google properly.

4. The length of titles and descriptions is also extended

Thanks to Ross Hudgens, who pointed out on Twitter last month, that Google has even gone on to extend the length of titles and descriptions.

He prudently drew our attention to the fact that Google is testing title tags again in the Search Engine Result Pages. From its previous 50- 60 characters, the title tags have now been increased to 70 or 71 characters. Here are further details.

You can write meta descriptions that now have been increased by 100 characters per line. Now, you can extend your descriptions to three lines from its previous two lines.

The move is still viewed as part of A/B testing and the search engine giant can change it any moment. However, if Google finally settles for the change and decides to continue the same on a long term basis then it’s definitely going to open up a window of opportunity for you.

If you are now able to make use of three instead of two lines for meta descriptions, then that can be considered to be a significant opportunity to describe your product better.

Tell your users what your page is all about in a more elaborate fashion. Since, this particular change is still in its testing phase, it is not really prudent for marketers to base their SEO efforts on the same.

You might as well start writing bigger meta descriptions and titles based on the changes noticeable as of now, but there is no guarantee that they will yield results in the long term. Along with the increased title tag size, Google, as per reports, has also increased the width of Answer Boxes and Featured Snippets.

However, it has decreased the height of the Answer Boxes or the Featured Snippets.

As is already mentioned above, at the heart of the Google’s new SERP layout is its (i.e. Google’s) pursuit of bolstered user experience. As far as the impact of these changes on SEO is concerned, Bryan Minor from Acquisio observed that there hadn’t been any drastic change regarding the overall position or ranking.

Though there were definite outliers but nothing was directly attributable to the loss of the right rail ads. One area which has remained largely unaffected is mobile marketing.

Much to the relief of marketers, only 5% of the search results had been affected by the changes in the right rail ads. The magnitude of the SERP changes brought about by Google is not alarming simply because it has neither helped businesses significantly in the organic landscape nor hurt them.

Most of the accounts have remained steady. However, those who faced plummeting traffic, attributed it to other constant factors like competition, site issues, etc. The average loss hovered between 1 to 6%.

Most of the changes, as it can be seen are still being experimented with – as such it’s a tad early to blurt out absolute comments on their impact.